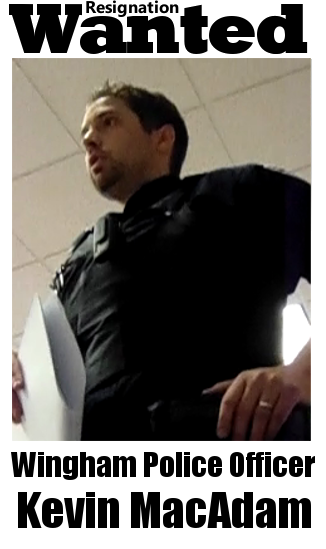 The OPP threatened the victim of North Huron councillor kevin falconers attack. He was told that if he wanted to proceed with charges, 7 people (councillor members) will claim he attacked/assaulted the councillor. Luckily the victim only received a minor wrist injury.

The victim asked for charges to be laid against Councillor kevin falconer for his physical assault on 14Aug2020, the officer flatly refused. The victim asked to speak to the officers supervisor, the officer stated they might be able to make that happen in a few days. The victim told the officer if he couldnt figure out who is telling the truth, arrest both of us and let a judge sort it out. The officer refused that suggestion.

This officer just happens to be Hall Of Shamer kevin McPerjury. You likely remember him from the August Atrocities which ultimately led to the disbanding of the Wingham Police. NOTE: 5 councillors were caught all telling the exact same lie to the police/court and McPurjury was caught lying on the stand. Thanks to Wingham Copwatch their lies were exposed and all their fabricated charges dismissed.