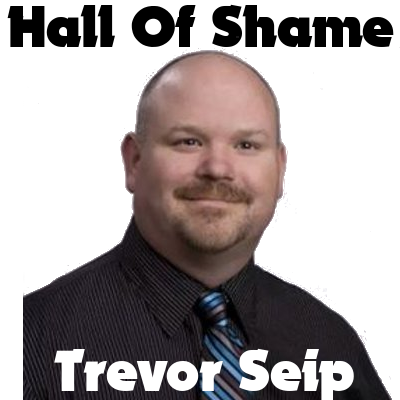 North Huron councillor and head of the North Huron police service board trevor seip has been inducted into the Hall of Shame in part for the following reasons.

It is clear trevor seip unilaterally makes decisions for the police board, as demonstrated the night of the OPP police costing presentation when he immediately told them No Sale. The Public was not consulted, council was not consulted, nor was the North Huron Police Service Board. Trevor seip should offer his resignation immediately for abuse of power and an Ombudsman and/or criminal investigation should be initiated.

During the OPP costing meeting the Public was barred from asking questions so trevor and yolanda could slam the OPP while praising the Wingham police with bullshit comments/questions like Will the OPP do regular foot patrols in Wingham like our hero Wingham police always do? To this date there has never been a sighting of a Wingham officer on foot patrol in Wingham, to claim foot patrols are a regular occurrence is complete and utter bullshit.

Trevor and his traditional media allies will tell you the OPP will cost more. This is not true and was explained the night of the presentation. The OPP wanted to do a followup meeting to offer clarification and allow the Public to ask questions. This was denied by trevor seip, sadly the rest of council will not stand for what is Right. Trevor now gets to write up the new contract for the Wingham police, which will be rubber stamped by council as usual.

Trevor seip has also barred recording of North Huron Police Service Board meetings. Why? Go to one and you will see how unprepared and admittedly ignorant he is. Trevor has also refused to move the Police Service Board meetings to council chambers so they can be broadcast on YouTube like council meetings. Why does he continue to refuse to do this? Just like neil vincent, seip knows that one question can topple the regime, and all steps must be taken to eliminate Public input/questions as they are a threat.

Seip also lacked the temerity to answer the following question as head of the Police Service Board. Would allowing pedestrians to use the sidewalks in the winter enhance pedestrian safety. Clearly the answer is yes, but trevor refused to comment as head of the North Huron Police Service Board, and claimed pedestrian safety is not their concern. Well, except for creating community safety zones, putting up huge signs, and lowering the speed limit to 30Km to reduce severity of collisions with pedestrians, speed enforcement, etc. Forcing our children to walk in traffic in winter to get to school clearly endangers their lives, and as head of the Police Board trevor is absolutely fine with that. Cleary seip has politicized the North Huron Police Service Board and should be forced to resign immediately.

Trevor seips actions to block Public input, refusal to make zero cost transparency improvements, being political as head of the North Huron Police Service Board are absolute indicators of corruption and reason enough for seips inclusion into the Hall of Shame for life.